The Sebright Baronetcy, of Besford in the County of Worcester, is a title in the Baronetage of England. 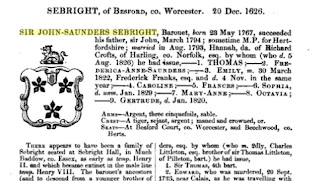 It was created on 20 December 1626 for Edward Sebright, High Sheriff of Worcestershire who later fought as a Royalist in the Civil War.

The arms of the Sebright Baronets are three cinquefoils, and the crest is a tiger.

Image from The baronetage of England. revised, corrected and continued by G.W. Collenby John Debrett, published by 1840. Original from Oxford University.

There is a Wikipedia article listing the Sebright Baronets.
Email ThisBlogThis!Share to TwitterShare to FacebookShare to Pinterest
Labels: England, History, People