As freelance swimming correspondent of the Daily Telegraph, the Daily Mail, and others, Pat was one of the most respected sports journalists of the post-war era.

She covered ten Olympic Games from London 1948, reporting on swimming, diving, synchronised swimming, water polo and, latterly, archery. A formidable administrator, for many years she single-handedly organised the accreditation, communication facilities and other arrangements for all the British sports journalists and photographers attending the Olympic Games. She was President of the swimming commission of the International Sports Writers' Association, first female Chairman of the Sports Writers' Association of Great Britain, and author of several books.

Pat Besford gives her name to the The Pat Besford Award for Outstanding Sporting Achievement, which has been awarded annually since 1979 by the Sports Journalists Association. Previous winners include Sir Robert William Robson, CBE (‘Bobby Robson’), the former international football player and former manager of several European clubs and the England national football team, who was awarded the Pat Besford Award for Outstanding Achievement in 2001 whilst manager of Newcastle United.

Bonhams auctioneers have details of The swimming and Olympic collection of the late Pat Besford, which was auctioned in July 2012 as part of their Olympic Games Sale in London's Knightsbridge.


2012 Winner of the Trophy: Jessica Ennis

Baroness Sue Campbell presented Olympic heptathlon champion Jessica Ennis with the Pat Besford Trophy for the outstanding performance of the year at the 2012 SJA British Sports Awards.  Presenting the award to Ennis with Camelot Managing Director Andy Duncan, Baroness Campbell tracked the journey of Britain’s Olympic and Paralympic sports from Atlanta 1996 to the present day, highlighting the dramatic improvements in performance since the introduction of National Lottery funding. 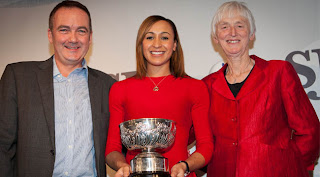