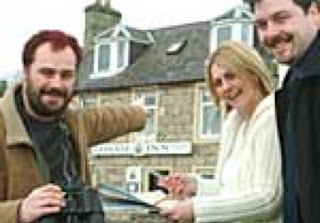 A couple have earned themselves a £5,000 reward after helping their pub company find a new outlet. Iain and Shona Besford, who run the Clifton Hotel in Lossiemouth, Scotland, alerted Punch Taverns when they heard that neighbouring pub, the Lossie Inn, was being put on the market. The couple are pictured receiving their £5,000 finder’s fee from Punch’s business relationship manager Jan Mimiec.

The Publican: Couple pleased as Punch with reward for finding pub

British banks are facing a deluge of claims from unhappy customers who believe they have been illegally overcharged for unauthorised overdrafts. District Judge Ian Besford took an approach which contrasted with that of many other judges around the UK, some of whom had started complaining about the tactics being used by the banks. Judge Besford wrote to claimants saying he was considering “striking out” 44 claims as they disclosed “no reasonable prospect of success” in light of a recent decision where a Birmingham court ruled in favour of Lloyds TSB. However, most of the cases were eventually settled in a victory for the campaigners.

Despite inclement weather, there were records galore at the Essex Athletics Championship in May 2007, hosted by Chelmsford AC. Ellie Besford of Chelmsford won the new under-15’s girls pole vault with three metres to become the first record holder.

A man was been found stabbed and severely injured in Sunderland. The 42-year-old victim was discovered in Besford Grove and taken to the city’s Royal Hospital. A spokesman for Northumbria Police said a 35-year-old man had been arrested in connection with the incident.

4,000 sheep were slaughtered in Besford, Worcestershire, on 17 March 2001. The foot-and-mouth outbreak of 2001 led to the deaths of nearly four million animals in the UK, and destroyed thousands of farmers’ livelihoods. It brought devastation to much of the tourist industry and the rural economy. Foot-and-mouth is a highly contagious viral disease of cattle and pigs. It can also infect sheep and other animals.

Email ThisBlogThis!Share to TwitterShare to FacebookShare to Pinterest
Labels: News